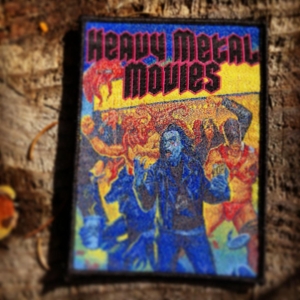 Return of the living bonus! From now until the film breaks, all orders for THE SILVER SCREAM SHOCK BOX will include this limited woven color patch featuring Andrei Bouzikov book jacket artwork!!

This is a hefty 7 lbs. (3.2 kg)  collection of eye-blasting reading material from Bazillion Points, collecting three of the most ripe and ridiculously revelatory film books ever written: HEAVY METAL MOVIES: Guitar Barbarians, Mutant Bimbos & Cult Zombies Amok in the 666 Most Ear- and Eye-Ripping Big-Scream Films Ever!, by Mike “McBeardo” McPadden; TEEN MOVIE HELL: A Crucible of Coming-of-Age Comedies from Animal House to Zapped!, by Mike “McBeardo” McPadden; and SWEDISH SENSATIONSFILMS: A Clandestine History of Sex, Thrillers, and Kicker Cinema, by Daniel Ekeroth.

The ultimate guidebook to the complete molten musical cinema experience. Lavishly illustrated and featuring more than 666 of the most metallic movie moments of all time.

Keep reminding yourself: IT’S ONLY A BOOK… Heavy metal and high-thrill cinema have been joined together like mutant twins since before Black Sabbath took the name of a chilling Italian horror film in 1970. The unadulterated journey of Heavy Metal Movies spans concert movies and trippy midnight flicks, inspirational depictions of ancient times and future apocalypses, and raw hand-held digital video obsessions. As brash, irreverent, and visceral as both the music and the movies themselves, Heavy Metal Movies is the ultimate guidebook to the complete molten musical cinema experience.

Born in the drive-in theater backseats of the 1970s, the demonic visions of Teen Movie Hell fueled the VCR, cable TV, and shopping mall multiplex booms of the 1980s before collapsing in the 1990s in a pixelated pile of cable dissipation and Internet indulgences. Between George Lucas’s American Graffiti in 1973 and Richard Linklater’s Dazed and Confused twenty years later, lust-driven laugh riots on the order of Animal House, Porky’s, Fast Times at Ridgemont High, and Revenge of the Nerds boomed at the box office and conquered pop culture by celebrating adolescent misbehavior run amok

In the annals of grindhouse exploitation cinema, Italy owns the giallo, Australia offers Ozploitation, and Sweden has spawned… the SENSATIONSFILM!

Sweden’s prominent and secure film legacy is associated internationally with Ingmar Bergman’s successful and high-quality works. However, even the greatest Swedish director could not resist another breed of Swedish film—notorious for laissez-faire nudity, relaxed sexuality, drugs, and shocking violence—the sensationsfilm.

“I look back with genuine joy. I am so very happy I could be a part of the seventies, it was so incredibly interesting. I carry it with me; it is a part of me. I would never deny being in those movies. I know that a lot of people do so, but I just had a blast.”— Christina Lindberg

“Into this rising whirlwind of madness, I was born. As the ‘70s came along, all limits were forgotten. Sweden was flooded with sexually explicit and violent films of every kind…and all morals were gone.”—Daniel Ekeroth